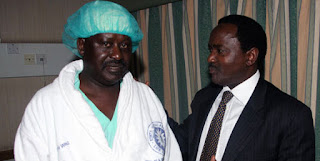 The operation, which they described as minor, was done on Monday night, and was meant to relieve pressure, which had built up outside his brain, Dr Livingston Oluoch-Olunya, a neurosurgeon, said at the hospital.

Mr Odinga was driven to hospital at 6pm by his driver, complaining of a headache and general fatigue.

“Following examinations and initial investigations, he was found to have a build-up of pressure outside the brain leading to headache,” Dr Oluoch-Olunya said.

“A team of doctors got together, and within a short period, it was agreed that a minor procedure be carried out on the left side of the head to relieve the pressure,” added Dr Oluoch-Olunya, who was accompanied by Dr Mahmood Qureshi, another neurosurgeon.

The pressure may have been caused by the PM banging his head in his car some weeks ago, the doctor said. Dr Oluoch-Olunya added that Mr Odinga was not in any danger and was “doing just fine” but will be in hospital for five days.

“The pressure was relieved when some fluid was removed through a small opening in the skull. The procedure was carried out successfully and the Prime Minister is doing fine. Doctors have advised that he rests for at least five days,” said Dr Oluoch-Olunya, adding:

“I would like to assure the country that he is actually well. The headache that he had yesterday has all been cleared.” Dr Cleopa Mailu, the Nairobi Hospital’s chief executive officer, was present during the briefing. Earlier, the PM’s press team issued a statement saying he was being treated for fatigue.

Mr Odinga, who is 65, is one of Kenya’s most energetic politicians and will normally have a punishing schedule every day. Deputy PM Musalia Mudavadi will preside over two engagements which the PM was scheduled to attend on Wednesday and Thursday. His last engagement on Monday was at the clean-up of the Nairobi Dam, where he looked exhausted and ill.

“Immediately after his function at the Nairobi Dam last (Monday) evening, the PM went to Nairobi Hospital for a check-up because he felt some general exhaustion. After tests, doctors started treating him for fatigue,” said his press secretary Dennis Onyango.

Mr Onyango had said Mr Odinga was fit enough to return to work. “The doctors have assured us that the PM is in good enough condition to come to office and work as usual if he feels like. But they are not allowing that. They strongly recommend that he takes the rest,” he said during a press briefing at the Treasury.

Doctors and the family had requested that access to the premier be restricted. “The doctors have further recommended complete bed rest for a few days and they will confine him in hospital for that period. During that period, the hospital will restrict access to him to ensure he gets the rest that he needs,” he said.

“He is very active. I have just seen him. He is in fact enjoying the World Cup,” Prof Olweny said. Ms Connie Sigei, his sister-in-law said the PM was doing fine. “He even ate boiled maize I had brought him.” The last time Mr Odinga was admitted to hospital was in April 2008, when he had an eye operation in Germany.

Mr Odinga’s illness comes at a critical time in the referendum campaigns when the ‘Yes’ team that he leads with President Kibaki has resolved to aggressively rally the public behind the proposed constitution. On Monday, he attended the ‘Yes’ campaign strategy meeting at the Kenyatta International Conference Centre in Nairobi during which the ‘Greens’ agreed on a plan to counter the gains of the ‘No’ team.

“The PM is an active person and he is the kind who can have five functions in a day and attend all of them,” Mr Onyango said.
Posted by ME at 3:41 AM