Dwight Howard's free-agent courtship to begin with Rockets as frontrunners

After two years of careful planning and preparation to make themselves irresistible to Dwight Howard, the Houston Rockets have emerged as the frontrunners to sign the free agent center and will make a formal presentation to him on Sunday night in Los Angeles, league sources told Yahoo! Sports.
The Rockets, Atlanta Hawks, Dallas Mavericks, Golden State Warriors and Lakers will make presentations between Sunday's midnight ET start of free agency and Tuesday evening, sources told Y! Sports.
Howard doesn't want this process to extend long beyond his final meetings on Tuesday and could have a decision before the end of the week, sources said. 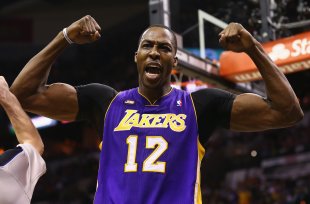 Dwight Howard might need less than a week to decide where he wants to sign. (Getty Images)"He wants to make a decision based on basketball more than anything else," one source with knowledge of Howard's thinking told Y! Sports.
For this reason, Howard has been leaning toward the Rockets in recent weeks and considers them the only team that would instantly allow him to play for a championship contender, sources said. The Lakers aren't out of contention for Howard, but they are running second with the meetings starting Sunday in Los Angeles, sources told Y! Sports.
Two of the biggest hurdles facing the Lakers' ability to re-sign Howard remain his disdain for coach Mike D'Antoni's system and a belief that the Lakers not only aren't a championship contender as constructed, but lack the assets and financial flexibility to become one in the near future, sources told Y! Sports.
Although Lakers general manager Mitch Kupchak has recently told D'Antoni that his job is secure, sources said, the fact that management hasn't allowed him to start hiring assistant coaches for a depleted staff has left many suspicious the Lakers are keeping the option of cutting ties with D'Antoni should it allow them to re-sign Howard.
And the one coach who has most recently been considered for an assistant's spot on the staff, Kurt Rambis, is closely tied to the Buss family and the ever-lurking Phil Jackson. The Lakers are desperate to hold onto Howard, and the reality remains that two of the people who should be most important in the retainment process – D'Antoni and star Kobe Bryant – have poor relationships with him. 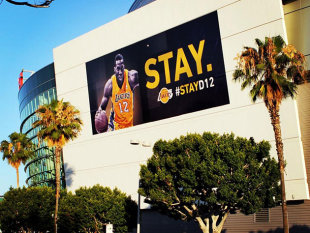 The Lakers have put up billboards in L.A. encouraging Howard to re-sign with them.The Lakers can offer Howard a five-year, $117 million-plus deal – one year and nearly $30 million more than the rest of his suitors.
The Rockets will sell Howard on a four-year, max contract with advantageous Texas tax rules, a roster constructed for championship contention, an offense designed with him as a cornerstone and an imprint into China and the Far East that could hold immense marketing and endorsement possibilities for him.
Because of their ties to Yao Ming and now Jeremy Lin, the Rockets are the most televisedNBA franchise in China, with data showing that nearly 300 million regular-season viewers watched Houston on CCTV 5 this season. For Howard, the Rockets sell will assuredly be how much more lucrative sneaker, appearance and marketing possibilities will be for him in a basketball-driven part of the world.
Dallas is selling Howard a two-year plan to reshape its roster and the championship pedigree of owner Mark Cuban, coach Rick Carlisle and star Dirk Nowitzki.
Atlanta has the cap space to bring Howard back to his childhood home, but Howard has never shown a desire to play as a professional there.
The Warriors have the toughest path to try and acquire Howard – needing a sign-and-trade scenario with the Lakers to make it happen. Golden State hasn't constructed its franchise with the pursuit of Howard as a priority, and has shown little inclination to gut its excellent young core to deliver the Lakers assets in a sign-and-trade deal.
The invitation for the Warriors to meet with Howard stands as much as a sign of respect for the emergence of the franchise under owner Joe Lacob, general manager Bob Myers and coach Mark Jackson. Those three will be part of the team's contingent meeting Howard, sources said.
Posted by ME at 3:40 PM