Apollo 11 lunar module pilot Buzz Aldrin kicks up moon dust during a moonwalk on NASA"s historic …
The moon has a distinctive smell. Ask any Apollo moonwalker about the odiferous nature of the lunar dirt and you'll get the same answer.
With NASA's six Apollo lunar landing missionsbetween 1969 and the end of 1972, a total of 12 astronauts kicked up the powdery dirt of the moon, becoming an elite group later to be tagged as the "dusty dozen."
From the modest 2.5 hour "moonwalk" of Apollo 11 to the forays totaling just over 22 hours outside a spacecraft on Apollo 17, NASA's Apollo landing crews could not escape tracking lunar material inside their moon lander homes. [The Moon: 10 Surprising Facts]
Decades later, moonwalkers and lunar scientists are still trying to appreciate exactly what the moon's aroma brings to the astronaut's nose.

“All I can say is that everyone's instant impression of the smell was that of spent gunpowder, not that it was 'metallic' or 'acrid'. Spent gunpowder smell probably was much more implanted in our memories than other comparable odors," said Apollo 17's Harrison "Jack" Schmitt, a scientist-astronaut who walked the moon's surface in December of 1972.
Schmitt said that he believed all the moonwalkers agreed and commented at the time that, when they took their helmets off, 'fresh' regolith (the scientific name for moon dirt) in the cabin air smelled like spent gunpowder. [Apollo Quiz: Are You A Moon Landing Expert?]
"For what it is worth, I always have suspected that the olfactory sensors are reacting to a variety of unsatisfied electron bonds as one would have in both just fired gunpowder and lunar dust newly introduced in the cabin," Schmitt said. "By the way, the time from starting re-pressurization [of the lunar lander] to my first comment about gunpowder was almost exactly seven minutes."

Larry Taylor, director of the Planetary Geosciences Institute at the University of Tennessee in Knoxville, agrees with Schmitt's take. He served in the "back-room" at NASA's Johnson Space Center in Houston during the Apollo 17 mission, and was one of those who directly advised the astronauts on the moon during their trots across the lunar landscape. 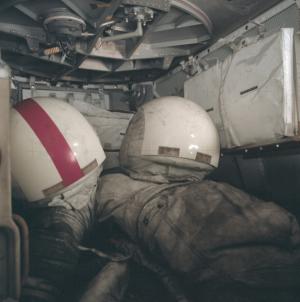 At the conclusion of Apollo 17’s mission in December 1972, moonwalking suits and space helmets are c …
"When the entire subject of the dust smell came up several years ago, I put forth that what the astronauts were smelling, that is, what their mucus membrane sensed, was highly activated dust particles with 'dangling bonds,'" Taylor said.
Taylor said that when a geologist smashes a rock here on Earth, that person will smell some odor that has been generated by the smashing of minerals, thereby creating the so-called dangling bonds.
But on the moon, the dangling bonds can exist for a long time, Taylor said. And because lunar rock and soil is roughly 43-percent oxygen, most of these unsatisfied bonds are from oxygen.
"In a nut-shell, I believe that the astronauts all smelled unsatisfied dangling bonds on the lunar dust … which were readily satisfied in a second by the lunar module atmosphere, or nose membrane moisture," Taylor told Space.com.

Apollo 11 lunar module pilot Buzz Aldrin also recalls the smell of the moon. As Armstrong and Aldrin re-entered and re-pressurized the Eagle lunar lander, their suits and equipment were soiled by lunar dust. That dust has a definite odor, he said.
"It was like burnt charcoal," Aldrin said, "or similar to the ashes that are in a fireplace, especially if you sprinkle a little water on them."
Aldrin also noted yet another lunar dust episode on the Apollo 11 mission.
"Before we left Earth, the lunar dust was considered by some alarmists as very dangerous, in fact pyrophoric, capable of igniting spontaneously in air," Aldrin said. "The fact that the lunar dust had been so void of contact with oxygen, as soon as we re-pressurized our lunar module cabin it might start to heat up, smolder, even burst into flames. At least that was the worry of a few. A late-July firework display on the moon was not something advisable."
So Aldrin and Armstrong staged an ad hoc moon dust test. They did it using a so-called "grab sample," a lunar sample collected quickly by Armstrong and stashed in his spacesuit pocket in case there was a problem that forced the moonwalkers to depart the scene in a hurry.
That grab specimen was placed on the cylindrical flat top of the Eagle's ascent engine cover. And as the cabin began to fill with air, both Armstrong and Aldrin waited to see if the lunar sample would indeed smoke and smolder.
"If it did, we'd stop pressurization, open the hatch and toss it out. But nothing happened. We got back to the business of readying for departure from the moon," Aldrin said.

It was Thomas Gold, a professor of astronomy at Cornell University who died in 2004, that first flagged the explosive potential of moon rock, said Donald Bogard, a Heritage Fellow at the Lunar Planetary Institute in Houston, Texas.
From 1971 until his retirement from NASA in 2010, Bogard was a principal investigator in NASA’s lunar and meteorite research programs and was a member of the science team that performed quarantine testing of Apollo lunar samples between 1969 and 1971.
"Tommy Gold was partly correct when he warned NASA prior to Apollo 11 that the lunar dustbrought into the lunar module might spontaneously combust and produce a safety issue. I was called into a JSC meeting prior to Apollo 11 to discuss this possibility," Bogard said. "Gold had realized the likely reactive nature of lunar material surfaces, but had over-emphasized their reactive effects."
Leonard David has been reporting on the space industry for more than five decades. He is former director of research for the National Commission on Space and is co-author of Buzz Aldrin's 2013 book "Mission to Mars – My Vision for Space Exploration" published by National Geographic. Follow us @Spacedotcom, Facebook and Google+. Original article on Space.com.


Copyright 2014 SPACE.com, a TechMediaNetwork company. All rights reserved. This material may not be published, broadcast, rewritten or redistributed.