Another plane disappears with 162 onboard

WHAT WE KNOW SO FAR:
- AirAsia flight QZ8501 bound for Singapore from Surabaya, Indonesia and carrying 162 people on board went missing Sunday morning.
- Contact with the plane was lost around an hour after departure, somewhere over the Java Sea between Belitung island and Pontianak, on Indonesia's part of Kalimantan island.
- Search and rescue operations were launched with the Indonesian army as well as Singapore and Malaysia scouring the area around Belitung, but have been suspended for the night.


Indonesia air traffic control lost contact with AirAsia flight QZ8501 bound for Singapore from the Indonesian city of Surabaya on Sunday morning.
Search and locate efforts were launched but Indonesia later suspended the operation as darkness fell. The national search and rescue agency said the operation will resume at 6 a.m. in the morning, with the search area expanded to include mountainous areas on land.
Earlier, AirAsia released a statement listing 162 people on board, with 138 adults, 16 children and one infant making up 155 passengers along with seven crew members (two pilots, four flight attendants and one engineer).
The passengers comprise one Singaporean, one Malaysian, one British, three South Koreans and 149 Indonesians, while the crew consists of six Indonesians and one French. See the full manifest here.
The Civil Aviation Authority of Singapore (CAAS) confirmed that the Singaporean on board the missing flight is a two year-old girl travelling with her father, the British national.
A Changi Airport staff holds up a sign to direct possible next-of-kins of passengers of AirAsia flight QZ 8501 from Indonesian city of Surabaya to Singapore, at Changi Airport in Singapore December ... more
1 / 21
Reuters | Photo By EDGAR SU / REUTERS
Share to FacebookShare to TwitterShare to Pinterest
Close
Previous image
Next image
QZ8501 lost contact with Indonesian air traffic control at 7:55am local time, 42 minutes after departure and an hour before it was scheduled to land in Singapore.
Reuters reports that the aircraft was between the Indonesian port of Tanjung Pandan and the town of Pontianak, in West Kalimantan on Borneo island, when it went missing without a distress signal.
The plane was on the submitted flight plan route before it asked for permission to deviate to avoid "bad weather" described by officials as dense storm clouds, strong winds and lightning.
"The plane requested to the air traffic control to fly to the left side which was approved, but their request to fly to 38,000 feet level from 32,000 feet could not be approved at that time due to a traffic, there was a flight above, and five minutes later the flight disappeared from radar," said air transportation chief Djoko Murjatmodjo.
The captain in command had a substantial total of 6,100 flying hours and the first officer a total of 2,275 flying hours, said AirAsia, adding that the jet underwent its last scheduled maintenance on 16 November 2014. 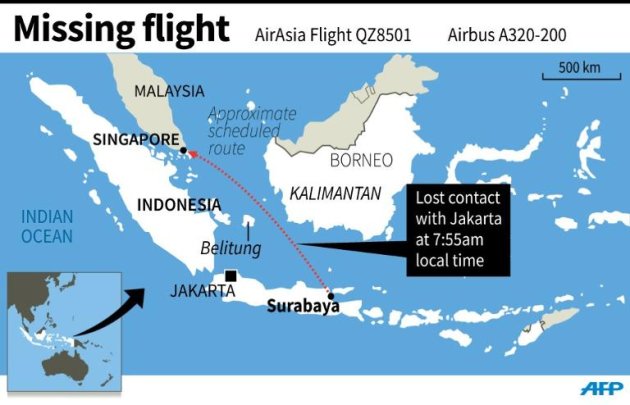 Map locating the scheduled flight AirAsia QZ8501, which went missing on Sunday morning
Indonesia deployed seven aircrafts, four navy ships and six boats from its search and rescue agency. It has received offers of support from Australia, Singapore, Britain, South Korea and Malaysia so far.
A C130 plane was deployed by the Republic of Singapore Air Force in the afternoon, with another aircraft due to join the search Monday morning.
Singapore Prime Minister Lee Hsien Loong and his Malaysian counterpart Najib Razak also took to social media to comment on the situation.
https://sg.news.yahoo.com/contact-with-airasia-flight-qz8501-bound-for-singapore-from-surabaya-lost-033803688.html
Posted by ME at 4:25 PM