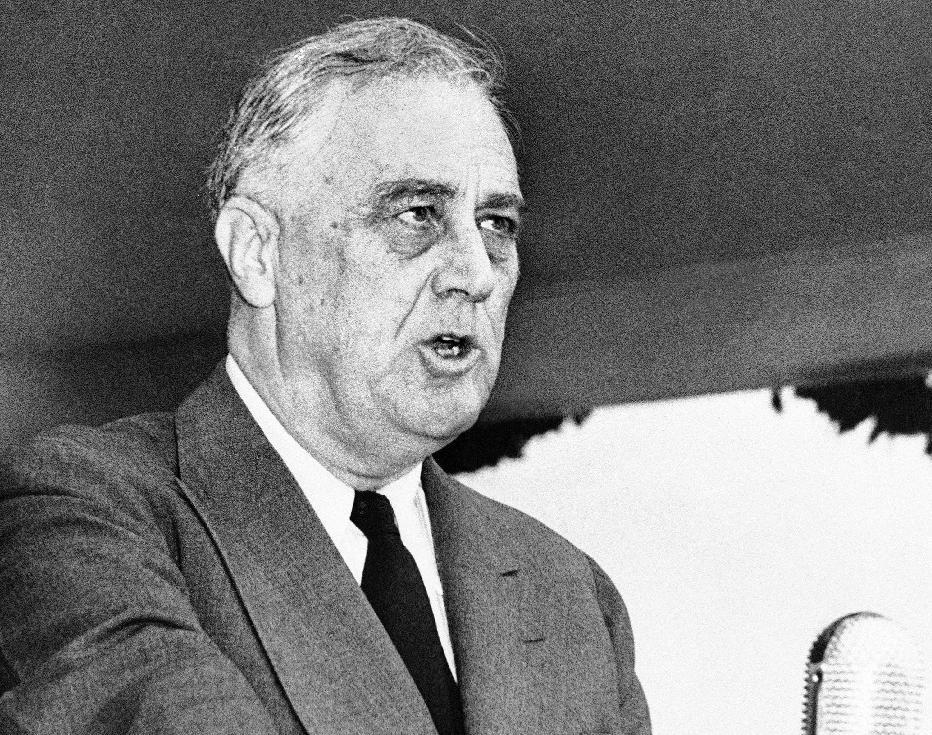 Former Secretary of State Hillary Clinton is the front-runner for the 2016 Democratic presidential ticket, according to most political pundits. The presidential hopeful’s husband, former President Bill Clinton, has made millions on lucrative book deals and more than $100 million on the speaking circuit. Secretary Clinton has recently begun to earn that kind of money as well.
Secretary Clinton received an estimated $14 million advance on her new book last year, and she has earned hundreds of thousands of dollars for each speaking engagement, figures that rival her husband's. In all, the couple’s net worth is estimated by 24/7 Wall St. to be $55 million, making it one of the wealthiest presidential estates in history.
ALSO READ: States With the Best (and Worst) Schools
Four years ago, 24/7 Wall St. published “The Net worth of Every American President, from Washington to Obama.” Each year, we have updated our figures to reflect the earnings of the still-living presidents. One thing remains clear: these days, it pays to be president, especially after leaving office.
Like last year, the only currently living president who is counted among of the wealthiest of all time is President Clinton.
President Barack Obama is not one of the richest presidents. The president receives a salary of $400,000 a year as president, which, while generous, isn't even close to today's top executives salaries. The President’s annual income has actually dropped steadily since he entered office. In 2009, the President's adjusted gross income was $5.5 million. That figure fell to less than $1 million in 2012. This is primarily due to a drop-off in revenue from his prior book deals. 24/7 Wall St. estimates the President’s net worth to be $7.5 million.
ALSO READ: The Most Hated Companies in America
View gallery 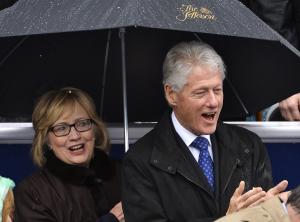 Former U.S. President Bill Clinton (R) and his wife Hillary attend the swearing-in ceremony of Terry …
The net worth of the presidents varies widely. George Washington’s estate was worth more than half a billion in today’s dollars. On the other hand, several presidents went bankrupt.
The fortunes of America’s presidents are often tied to the economy of their time. As the focus of the economy has changed, so has the way the presidents made their money.
It is not surprising then to find that the first few presidents — from Washington’s election to about 75 years later — were large landowners. They generally made money from land, crops, and commodity speculation. Of course, this left them highly vulnerable to poor crop yields, and they could lose most or all of their properties because of a few bad years.
By 1850, the financial history of the presidency entered a new era. Beginning with Millard Fillmore, most presidents were lawyers who spent years in public service. They rarely amassed large fortunes and their incomes often came almost entirely from their salaries.
These American presidents were distinctly middle class and often retired without the means to support themselves in anyway resembling  the presidential lifestyle. Buchanan, Lincoln, Johnson, Grant, Hayes, and Garfield had modest net worths when they died.
At the end of the 19th century and beginning of the 20th, there was another significant change to the economy. Large, professionally organized corporations in the oil, mining, financial, and railroad sectors allowed individuals to amass large fortunes.
View gallery 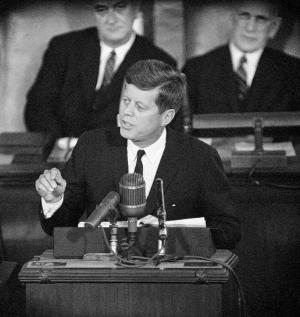 FILE - This Jan. 11, 1962 file photo shows President John F. Kennedy giving his State of the Union a …
The Kennedys were wealthy because of the financial empire built by Joseph Kennedy. Herbert Hoover made millions of dollars as the owner of mining companies. Indeed, since the early 20th century, the fortunes of many presidents, including Theodore Roosevelt, Franklin D. Roosevelt, John F. Kennedy, and both of the Bushes were driven by inherited wealth.
The net worth figures for the 10 wealthiest presidents are in 2010 dollars. Because several of the presidents, particularly in the early 19th century, made and lost huge fortunes in a matter of a few years, the net worth of each president is for the peak time. The exception to the 2010 rule are the presidents who are still living and have more recent earnings. In the case of each president, we have taken into account hard assets such as land, estimated lifetime savings based on work history, inheritance, and homes. Wages considered were earned for services as varied as collector of customs at the Port of New York to royalties on books, as well as ownership of companies and yields from family estates.
ALSO READ: America's Best- and Worst-Run States
This is 24/7 Wall St.’s list of the richest U.S. presidents.
10. John Fitzgerald Kennedy
> Net worth: $1 billion (never inherited his father’s fortune)
> In office: 1961 to 1963
> 35th president
Kennedy was born into wealth and married into it. His father was one of the wealthiest men in America and the first chairman of the Securities and Exchange Commission. His wife, too, was an oil heiress. Almost all of JFK’s income and property came from a trust shared with other family members.
10 Unusual Facts About US PresidentsPlay video 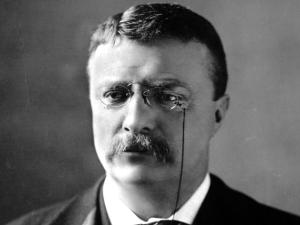 9. William Jefferson Clinton
> Net Worth: $55 million
> In office: 1993 - 2001
> 42nd president
Unlike other presidents, Clinton did not inherit any wealth and gained little net worth during 20 plus years of public service. After his time in the White House, however, he earned a substantial income as an author and public speaker. In 2005, Clinton earned a $15 million advance on his book “My Life.” Former Secretary Clinton's advance for her upcoming autobiography is expected to be nearly as much. In 2011, the former president was paid $750,000 alone to speak in Hong Kong for Ericsson. By 2012, the former president was estimated to have earned over $100 million. Secretary Clinton has started contributing to the family fortune since leaving office. It is reported that she earns more than $200,000 per speech.
8. Franklin Delano Roosevelt
> Net worth: $60 million
> In office: 1933 to 1945
> 32nd president
Roosevelt’s wealth came through inheritance and marriage. He owned the 800-acre Springwood estate, as well as properties in Georgia, Maine, and New York. In 1919, his mother had to bail him out of financial difficulty. He spent most of his adult life in public service. Before he was president, Roosevelt was appointed assistant secretary of the Navy by President Wilson.
7. Herbert Clark Hoover
> Net worth: $75 million
> In office: 1929 to 1933
> 31st president
An orphan, Hoover was raised by his uncle, a doctor. Hoover made a fortune as a mining company executive. He had a generous salary for 17 years and had extensive holdings in mining companies. Hoover donated his presidential salary to charity. He also owned “Hoover House” in Monterey, Calif.
White House Throws Deluxe Dinner for French Presid …Play video 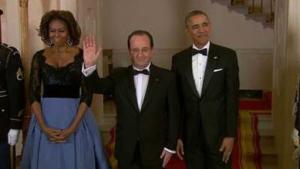 6. Lyndon Baines Johnson
> Net worth: $98 million
> In office: 1963 to 1969
> 36th president
Johnson’s father lost all the family’s money when LBJ was a boy. Over time, the 36th president had accumulated 1,500 acres in Blanco County, Texas, which included his home, called the Texas White House. He and his wife owned a radio and television station in Austin, Texas, and they had a variety of other moderate holdings, including livestock and private aircraft.
5. James Madison
> Net worth: $101 million
> In office: 1809 to 1817
> 4th president
Madison was the largest landowner in Orange County, Virginia. His land holding consisted of 5,000 acres and the Montpelier estate. He made significant wealth as Secretary of State and president. Madison lost money at the end of his life due to the steady financial collapse of his plantation.
4. Andrew Jackson
> Net worth: $119 million
> In office: 1829 to 1837
> 7th president
While he was considered to be in touch with the average middle-class American, Jackson quietly became one of the wealthiest presidents of the 1800s. “Old Hickory” married into wealth and made money in the military. His homestead, The Hermitage, included 1,050 acres of prime real estate. Over the course of his life, he owned as many as 300 slaves. Jackson entered considerable debt later in life.
3. Theodore Roosevelt
> Net worth: $125 million
> In office: 1901 to 1909
> 26th president
Born to a prominent and wealthy family, Roosevelt received a sizable trust fund. He lost most of his money on a ranching venture in the Dakotas and had to work as an author to pay the bills. Roosevelt spent most of his adult years in public service. His 235-acre estate, Sagamore Hill, now sits on some of the most valuable real estate in Long Island.
2. Thomas Jefferson
> Net worth: $212 million
> In office: 1801 to 1809
> 3rd president
Jefferson was left 3,000 acres and several dozen slaves by his father. Monticello, Jefferson's home on a 5,000-acre plantation in Virginia, was one of the architectural wonders of its time. He made considerable money in various political positions before becoming president, but he was mired in debt towards the end of his life.
1. George Washington
> Net worth: $525 million
> In office: 1789 to 1797
> 1st president
Washington's Virginia plantation, Mount Vernon, consisted of five separate farms on 8,000 acres of prime farmland run by more than 300 slaves. His wife, Martha, inherited significant property from her father. As president, Washington earned well more than subsequent presidents: his salary was 2% of the total U.S. budget in 1789.
Want to see the Net worth of Every American President? Click here for the full report.
Posted by ME at 10:01 PM